Woke up this morning to the sound of some kids smashing rocks together in the spot next to our tent at approx. 5.30am... Had an OK sleep, the floor was pretty hard and it got quite cold during the night (we left the inner door open). As we couldn't get back to sleep we decided to get up and have some lucky charms for breakfast. As I was going to the car to get something outta the boot I spotted a deer about 10foot away. We managed to get some pictures as it strolled past our pitch eating the plants, was so cool. We then went for a well needed shower which cost $2 each. 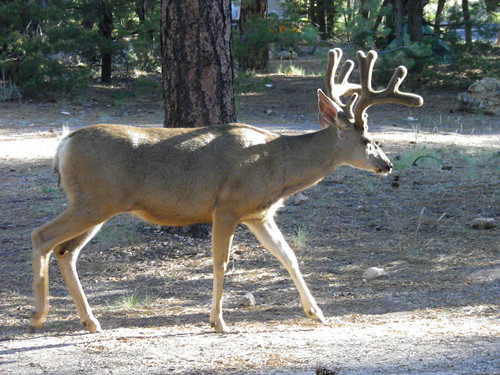 Once we were ready we jumped in the car with 2ltrs of water and a few crisps we had left over. We drove and parked at the Bright Angel Trailhead. By this time it was 8.45am and the sun was already getting hot. As we didn't have much food with us and we'd left it quite late we only decided to go as far as the 1.5mile house. The walk down was nice and easy, with quite a lot of spots of shade, as the trail made switchbacks down the canyon travelling along a fault line. There were spectacular views all the way down, with lots of squirrels following us hoping for some food. 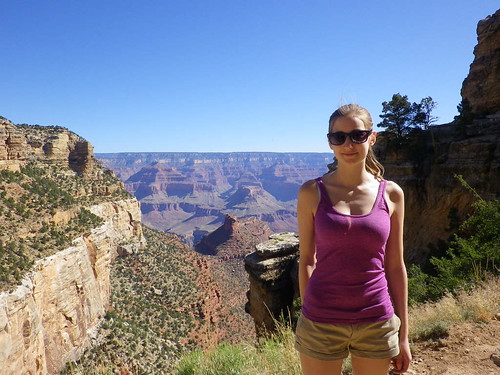 As you travel further into the canyon the temperature starts to rise so by the time we got there we were starting to feel the heat. They had restrooms and water here so we refilled our bottles before making the ascent back up. We were originally planning on following the trail until the Indian Garden, but as the temp was so high it wasn't advised. Apparently there would be no shade if we carried on further, which did not sound good! The way up was alot harder, but whenever there was a spot of shade we'd take a break and have some water. We also passed a group of Mormons which was quite cool. It was around 11am by the time we got to the top, and we felt good that we managed to at least hike a bit into the canyon.

We were really hungry at this point so we went to the village and had a pizza in the air conditioned building, which made us feel a lot more energised. We then went to the tent and chilled out for a couple of hours. Our tent's in partial shade, and we wanted to stay out of the sun during the hottest part of the day. We bought a pack of cards at the shop and played some games (including snap lol), and read some of our books.

At around 3.30, we drove out back to the Bright Angel Trailhead to park there as a lot of people park along the road or at the designated car parks. But this spot is as close as you can get to the red shuttle route, with lots of free spaces. We decided we were going to take this bus and jump off at all the points along the way. This route isn't driveable during the summer and so using the bus is the only way (other than walking) to see it all. We stopped off at each point, took loads of photos, then caught the next bus. 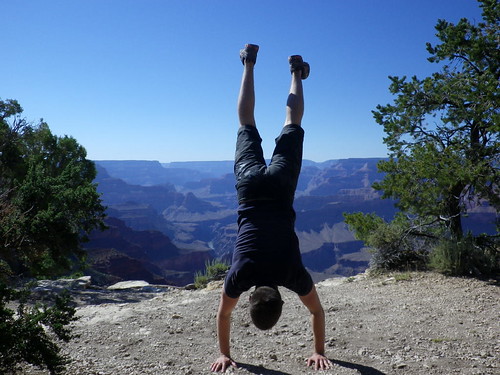 The views were breath-taking, and at some of the stops we were the only ones there! Our favourite stop was Pima Point. We continued this all the way to Hermit's rest, before getting the bus back to the transfer stop and driving back to the campground.

It was about 6pm by the time we got back, so we quickly lit the charcoal. Unfortunately they stopped allowing log fires the day we got here (due to it being summer so dry). We then waited... and waited... and decided to put in another firelighter. I think we were kinda impatient, but this was only because it was getting dark and we were trying to boil pasta and the water was still lukewarm 40mins after we started. It was just after sunset by the time it was all cooked, so we wolfed it down just before it was dark. We then headed to sleep as we wanted to be up in time to catch sunrise at 4.14am... well it was actually 5.14am but I didn't realise this yet.

The alarm went off at 3.30am this morning. So I snoozed it for 10mins but couldn't get back to sleep so decided to have a look at the sunrise info. which is

After a surprisingly good sleep we headed over to the Galaxy Diner. This was a 50s style diner that the Chinese guy recommended, but we'd also seen a couple of tourists wearing t-shirts